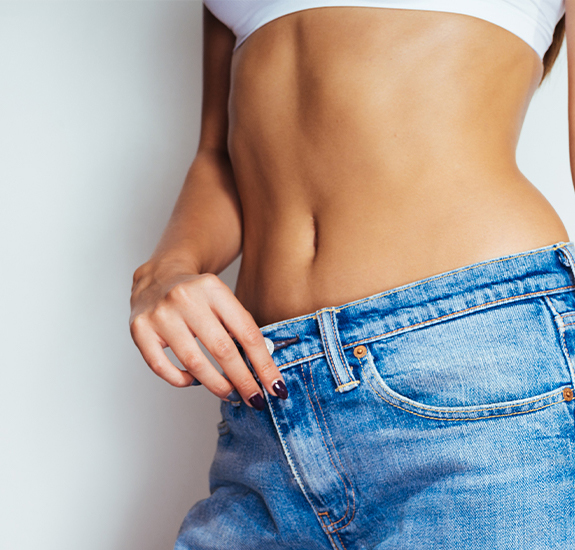 Dr. Tina West, Board-Certified Dermatologist and founder of The West Institute in Chevy Chase, MD, specializes in body contouring treatments custom-tailored to your aesthetic goals and needs. Read on to learn more about the treatments offered at our Body Contouring Center.

Emsculpt is a body contouring treatment that uses electromagnetic energy to stimulate muscles and simultaneously reduce subcutaneous fat without surgery, incisions, or downtime. It is the first and only non-invasive device that builds muscle and melts fat by building up the weak muscles underneath the fat. In addition, Emsculpt provides a non-surgical butt lift and improvement of abdominal separation (diastasis recti). The West Institute was the first practice in Montgomery County to offer Emsculpt. They were also the first to add FDA-approved applicators that build muscles in the arms and legs, including the calves.

Coolsculpting® is a revolutionary non-surgical permanent fat reduction technology that gently and effectively reduces or eliminates areas of unwanted fat. The results are similar to those of liposuction but without the surgery. At the West Institute, we have all of the most advanced, updated CoolSculpting body applicators, and the most up-to-date device (CoolSculpting Elite) that allows us to complete each treatment cycle in just 35 minutes! Compared to the traditional model, CoolSculpting Elite is faster, quieter, more comfortable, and freezes more fat in less time.

Qwo is the first FDA-sanctioned injectable treatment for cellulite. It contains two collagen-degrading enzymes to gently dissolve the fibrous bands that pull down on the skin to cause dimples. QWO will gradually disperse the tethers and let the skin float up and smooth over. These bands are considered the root cause of cellulite because they tug the skin down, causing surrounding fat to bulge under the surface. Dr. West was chosen as one of the very first practitioners in the area to use QWO due to her expertise and history of contributing to the development of injectable treatments.

LightStim MultiWave patented technology simultaneously emits multiple wavelengths (colors) of light. These wavelengths of light work together to give your skin the nourishment it needs for a more radiant and youthful appearance. LightStim emits UV-free, beneficial light rays that energize cells and stimulate the body’s natural process to build new proteins and regenerate cells. LED light therapy can be administered with a handheld device or via the LightStim Professional LED Bed.

Radiesse® is FDA-approved to replace volume loss on the hands. It is an injectable calcium-based dermal filler that can also be used to smooth and firm crepey skin (fine wrinkling) on the chest, arms, the area above the knees, and any other area that has lost elasticity. It works immediately upon injection, volumizing the treated area and additionally, as time goes on, the gel microspheres stimulate your naturally occurring collagen, leaving you with long-lasting natural results.

The West Institute’s Laser Hair Removal treatment utilizes High Speed LightSheer DUET, a state-of-the-art diode laser, which produces a large beam of highly concentrated light. The light emitted is absorbed by the pigment located in the hair follicles. LightSheer is also the first painless hair removal laser that requires no numbing cream. At the West Institute, we ensure the fastest and most painless option is available to our patients. Our device, with its large spot size, allows the process to treat numerous hair follicles simultaneously, making the treatment much faster than traditional laser hair removal alternatives.

Ready To See How Our Body Contouring Treatments Will Benefit You?

To learn how body contouring treatments can help create long-lasting results you’ll love, call Dr. West at The West Institute for Skin, Laser + Body Contouring at 301-986-9378 or fill out our online form today. We are located in Chevy Chase, MD, and proudly serve Bethesda, Washington D.C., Northern Virginia, and other nearby areas.

I went to Dr. West because she was one of only a couple of doctors in the area that performed Cellulaze to remove cellulite. I had my thighs and buttocks done. They look great! This was life-changing for me as I had severe cellulite and felt disfigured. It is such huge improvement, it really has changed how I feel about myself.